What does Namaste mean, when did Namaste originate, the difference between Namaskar and Namaste, and how can you use Namaste to benefit your yoga practice.

The word "Namaste" has roots going back thousands of years. It was used as a greeting in the Vedas, which are a huge body of ancient texts originating in India, all written in Sanskrit.

The Vedas are made up of texts of spiritual literature, religious knowledge, and Hindu scripture. "Vedic", from the Sanskrit word “veda”, means knowledge or revelation. Although it is said that the Vedas were written thousands of years ago, the words within the texts were spoken and taught for a long time before they were ever written down.

Breaking down these Sanskrit roots, namaste’s meaning is in 2 parts. Namas meaning a 'bow', and 'te' meaning 'you.' Put them together and this is a salutation literally meaning 'I bow to you.' What you are bowing to does vary from one translation and belief system to the next. For Hindus, Namaste is an expression of the belief that the divine self, or “atman”, is present in everyone.

'I bow to the god within you.”

At its roots, there is one thread though: "Namaste" should be seen as a greeting that honours the connections between our roots, rather than the differences in our branches.

When do you use Namaste?

The word is a common greeting in India. It can be used by anyone, to greet anyone – from strangers to family and friends – at any time of day. it's more akin to "Hello" in the way it’s used, which is not to diminish its depth of meaning. It remains an acknowledgement of a spiritual connection, not just a greeting.

In the West its use is more limited – to yogis and yoga classes. Which is a shame. Teachers will say the term to their students, who will repeat it back, as a sign of mutual gratitude towards each other, and recognition of the divine light within us all. Simply repeating Namaste at the end of a class can bring you back from focusing on the self in yoga, to connecting with others around you.

Saying Namaste at the end of a yoga session also shows respect and thankfulness to the yoga teachers of the past – connecting yogis past and present.

You can incorporate Namaste into your practice whether you do yoga by yourself or with other people.  If you want to use it when you’re alone you can say it aloud to open and close your yoga or meditation session. Try closing your eyes, inhaling deeply, and saying Namaste as you exhale. This can deepen your meditation, by allowing you to surrender your thoughts and give thanks to the world.

What is the difference between Namaskar and Namaste?

You may have heard some people say Namaskar instead of Namaste. No, they haven’t mispronounced Namaste completely – although they sound very similar and mean more or less the same thing, they are used in different ways.

They both offer salutations to another and both can be used as greetings or gestures of respect. However, Namaskar, pronounced “Nuh-muh-skar", is more formal and translates as “I pay my salutations.” It's also more likely to be used in a group setting.

The Anjali Mudra is often used alongside namaste or namaskar. The hands meet together by the sternum in prayer position. Anjali means “to offer” and mudra means “seal” – meaning a seal of offering. Given the hands placement it is also a symbol of returning to the heart. So, the word and gesture together work as the perfect complement to the layers of meaning of namaste.

Although in the West, the term is usually spoken by yogis alongside the Namaste gesture, in India, people often use the gesture itself to mean Namaste, without the need to speak the term aloud. So, let’s not just trot the word out, but instead reflect on its meaning.

Namaste... A powerful word that unites our past, present and future with the thread of connection.


Sign up to our newsletter and receive 10% off your first order, events & exclusive subscriber only events here 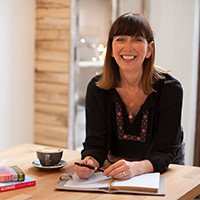 Free FedEx shipping in the UK when you spend over £75. Two working days delivery.